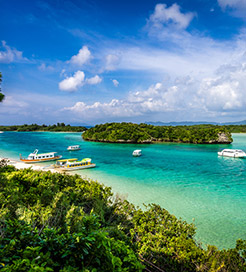 As the frequency and duration of crossings on some routes varies we would advise that you do a live search for crossings from Iriomote Island to Ishigaki Island to get the most up to date information.

Iriomote is the largest of the Yaeyama Islands in Okinawa Prefecture, Japan, located in the southern East China Sea.

It is considered to be one of Japan’s last great wildernesses thanks to the high density of jungle, swampy mangroves and meandering rivers, which are either part of the Iriomote National Park or protected state land, and the relatively small number of inhabitants.

Some of the country’s most impressive coral reef fringes the coastline, too, and the forested inland is home to the critically endangered namesake wildcat, making Iriomote one of the most biodiverse places in Japan.

As a remote island with no airstrip, all visitors must come and go by ferry. Iriomote has ferry terminals on the north and south coasts, offering a great number of quick sailings to the majority of the surrounding Yaeyama Islands.