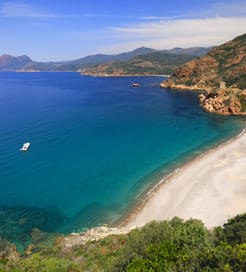 Compare ferries from Corsica to Italy

There are numerous ferry crossings operating from Corsica to Italy. Ferries currently connect 2 ports in Corsica with 4 ports in Italy.

There are a combined number of 51 ferry crossings each week across a selection of 6 Ferry Routes which are operated by 2 ferry companies including Corsica Ferries & Moby Lines with the shortest crossing taking around 2 hours 45 minutes (Bastia to Piombino).

This is a general summary of the services on offer between Corsica and Italy, for live information select from our Fare Search.

Ferries from Corsica to Italy

Lying west of Italy and southeast of France in the Mediterranean Sea, Corsica is an island with a mix of cultures and one of the most stunning coastlines in Europe.

On Corsica, you’ll find all the best things the Mediterranean has to offer: fine cuisine, picturesque beaches, crystalline waters and historic landmarks. You can spend your mornings soaking up the Corsican sun, your afternoons enjoying water sports, then wander through charming hilltop towns at sunset, admiring the medieval citadels along the way.

As an island in the heart of the Mediterranean Sea, Corsica is a great departure point for a large number of European destinations. There are multiple ferry ports along its 1,000-kilometre coastline, making it even easier to sail across to popular holiday destinations including mainland France, Italy and Sardinia.