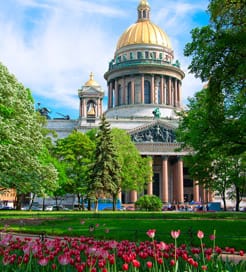 Compare ferries from Russia to Finland

There is currently just the 1 ferry route running between Russia and Finland operated by 1 ferry company – St Peter Line. The St Petersburg to Helsinki ferry crossing operates Weekly with a scheduled sailing duration from about 13 hour 0 minute.

Whilst we’ve taken great care to ensure the information on this page is correct, as the frequency and duration of crossings on all routes can vary from time to time we’d advise that you get a live quote for current availability on this Russia Finland crossing between St Petersburg and Helsinki.

Ferries from Russia to Finland

Russia, the largest country in the world, is a sovereign state in northern Eurasia stretching across the entirety of northern Asia and most of Eastern Europe.

As you would expect from a country measuring 17,125,200-square-kilometres, Russia has an enormous variety of landscapes and highlights including 23 UNESCO World Heritage Sites and a fascinating cultural heritage.

The European region in the west boasts ancient walled fortresses, majestic palaces, most notably in the capital, Moscow, with its famous Red Square and St Basil’s Cathedral. On the other hand, the more rural areas are dotted with attractive cottages and historical towns.

Given the country’s sheer size, Russia offers ferry routes to a wide range of international destinations. From the west, you can sail to northern Europe and Scandinavia, whilst in the east, there are ferry routes provided to East Asia.

Finland is a country and large peninsula in northern Europe, with Sweden to the west and Russia to the east.

‘The land of a thousand lakes’, which is actually speckled with around 187,888, is also known as ‘the land of a thousand islands’, making it one of Europe’s true great wildernesses. Also, given the vast volumes of water in Finland, it offers sublime kayaking and canoeing, too.

The capital, Helsinki sits on a large south coast harbour and is by far the most densely populated area in Finland. It boasts a fully flourished art scene alongside an innovative gastronomic culture, with highly trained chefs serving locally sourced food served in brand new eateries all over the city.

With numerous routes from Sweden across the Gulf of Bothnia, from Eastern Europe across the Gulf of Finland and from Germany across the Baltic Sea, travelling by ferry is a great way to reach the Finnish shores. These routes are operated by a wealth of excellent ferry companies, operating large fleets of luxurious vessels.