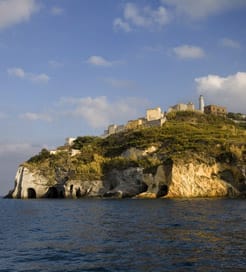 Scattered along Italy’s west coast in the Tyrrhenian Sea lie the stunning Pontine Islands, consisting of two groups: Ponza, Gavi, Palmarola and Zannone in the northeast and Ventotene and Santo Stefano in the southwest.

Palmarola is widely regarded as one of the world’s most beautiful islands. The steep, craggy coastline opens up into an enormous cove with a pool of crystalline water and picturesque caves. There is even a superb restaurant on the beach serving up fresh pasta.

There's also plenty to be explored wherever you go. The peaceful island of Ventotene features the remains of the Roman Villia Giulia where Emperor Augustus exiled his daughter in 2 BC for treason.

There are more historical remains on Zannone, an untouched island and part of the Circeo National Park, featuring the remnants of a Cistercian monastery.

There are frequent, high-speed crossings from Napoli, Terracina and the island of Ischia to Ponza and Ventotene.

You can also sail between Ponza and Ventotene, with a number of crossings provided each week.

Routes and Ports in Pontine Islands