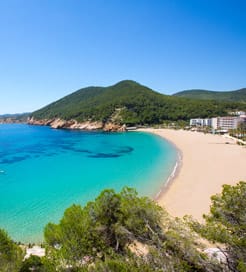 Compare ferries from Ibiza to Spain

There are numerous ferry crossings operating from Ibiza to Spain. Ferries currently connect 2 ports in Ibiza with 3 ports in Spain.

There are a combined number of 56 ferry crossings each day across a selection of 6 Ferry Routes which are operated by 8 ferry companies including Balearia, Trasmediterranea, Grandi Navi Veloci, Trasmapi, Aquabus, Mediterranea Pitiusa, Trasmapi Car & FRS Iberia with the shortest crossing taking around 25 minutes (Ibiza to Formentera).

This is a general summary of the services on offer between Ibiza and Spain, for live information select from our Fare Search.

Ferries from Ibiza to Spain

There’s a lot more to Ibiza than just incredible clubs, bars and beachfront parties. This beautiful, pine-clad island offers something for families, couples and those who simply want to relax in one of Spain’s most picturesque destinations.

Ibiza Town and Sant Antoni are a haven for partygoers, which are home to world-beating clubs, whereas the 210-kilometre coastline is blessed with some idyllic coves, hilltop villas and superb restaurants. Water sports are readily available, too, and cycling along the beaches and coastal paths offers a more scenic way of exploring the island.

The island’s ferry terminal, which is called 'Estacion Maritima del Puerto', is in Ibiza Town on the southeast coast. There are multiple sailings every day to Mallorca and Formentera, and there are daily routes to a few cities on the Spanish mainland.